The Reprint Company, Publishers, can date its origin to the mid-1950s. My father, Thomas A. Smith, was editor of the Spartanburg Journal, an afternoon daily newspaper. In the mid-1950s, he was involved in a serialized publication of John B.O. Landrum’s History of Spartanburg County (1900) in the newspaper. That type was saved and used to print an edition of Landrum’s book which the newspaper sold as a circulation promotion.

My dad’s interest in reprints of out-of-print books was sparked. He purchased a small offset press and put it to work in the basement of his home and in 1959 the first book appeared under the imprint of The Reprint Company. This was a reprint of another Landrum title, the Colonial and Revolutionary History of Upper South Carolina (1897). 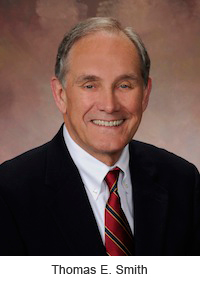 Finding some success with that title, he began issuing other titles printing them himself. He concentrated on the colonial and revolutionary history of the original thirteen colonies and began finding a slow but steady market for those titles in libraries as well as to individuals with an interest in local history and genealogy. By the end of the1960s, he had published about thirty titles.

I became publisher in 1970 and began moving it from a hobby-business to a fulltime occupation. We moved away from printing our books and began contracting their manufacture to professional book manufacturing firms which improved the quality of the finished product and allowed me time to market the books and grow the business.

In the early 1970s, I was contacted by the North Carolina Library Association. They had developed a list of twelve out-of-print North Carolina titles which they felt should be reprinted and wondered if I were interested. Jointly we developed a project which allowed all twelve books to be reprinted. An idea was born and I took that idea to other library associations. Over the next fifteen years I worked with library associations throughout the South and published reprint editions of approximately three hundred books.

From that time to the present, I have been involved in the publication of over six hundred titles with the area of specialization remaining local and regional history, scholarly material, and genealogical source material. We have done some selected original publications in those fields but are still primarily a publisher of reprints. Over the years, the vast majority of our books have been books pertaining to the South—Virginia, North Carolina, South Carolina, Tennessee, Georgia, Alabama, Mississippi, and Louisiana.

All books published by The Reprint Company, Publishers, are produced in a size as close to the original as possible. They are sturdily bound in cloth with a few exceptions bound in paper. All titles are printed on a long-life paper with a neutral pH factor.

Historically, most books of this nature have been done in small press runs. This has resulted in a book being published but often going out of print in a relatively short timeframe. When this happened, most publishers wanted to print the book again but over the years economic realities began to make it harder and harder to keep the books in print.

Now, advancing technology in the printing industry is changing that and it is possible to make these titles available in a Print on Demand format. We are taking advantage of this technology and beginning to bring many of our out-of-print backlist titles back into print as Print on Demand. Over the next few years we hope to do the best of our backlist this way.

Technically, when this happens, the book never goes out of print. In this format, your book is printed upon receipt of your order and is shipped to you directly from the bindery. Shipment is normally within five business days from receipt of the order. In our case, all of these books are hardback and are printed on long-life paper. In the book entry, the Print on Demand titles are so noted.